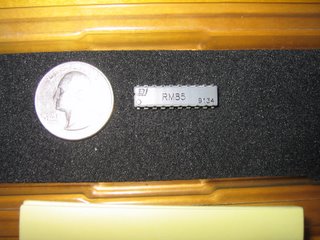 It all started this morning when a co-worker handed me an IC that literally boggles the mind. She told me that she had found it under who knows what and that there was only one of them, maybe a few in all the land. Willy Wonka’s Chocolate Factory Golden Ticket? I was setting myself up for disappointment.

I quickly went and did a few googles on it (note the use of google as a verb…+10 mana points). I first looked up the logo and quickly identified it as BI Technologies. Going to their webpage I was impressed that they were ‘A leader in electronic components for over 50 years’. That, my friend, is a long time in any business. It was just unfortunate that they hadn’t updated their product catalogue in 50 years. And of course, this IC was probably made 49 years ago which left me with no choice. I called BI Technologies.

Upon getting a live human to talk to, I told her I needed information on a product. I quickly gave her the product number (RM85) and she asked me if that was all. I also gave her the other number in the right hand corner (9134) and she mentioned that was the date code. So that means the chip was made Sept 1, 1934 or 9/13/04 … whichever you think is right. Although there has been some discussion on the format of the date code around the water cooler, it doesn’t really matter because BI Technologies has no clue what this thing is. Then she referred me to BI Technologies’ website ‘to look at the pictures so I can identify it’ (thanks!) . Good enough for Scott, but I just had to dig deeper.

My fine co-worker Aniel was running parallel searches on the IC name and found a distributor in Texas that had 23 in stock. I made the call and was talking to a human within a minute. I asked if they had a spec sheet on the part they were selling. Obviously not, since when I asked if they knew what it’s function was, the man replied, “…I think it’s some sort of relay?”. I thanked him for all his hard work and hung up faster than you can say ‘Javascript error’ three times backwards.

My next plan of action is to email the following pictures to BI Technologies and see if they can identify it, tell me what its function is, or let me into Wonka’s factory, which in reality is what keeps me going these days. 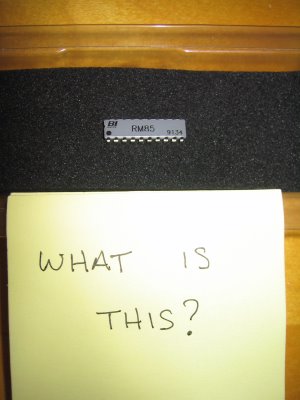